Karnilla: Love Is a Battlefield

Last week, after a series of up and down appearances, Karnilla reached the pinnacle of her existence as a character (so far). Long-anticipated confrontations against Enchantress and Loki were the highlights, but overall she broke free of the mold of Balder-obsessed schemer, if only for a little while. Now, the challenge remains, can she maintain that momentum? So far, during this retrospective exploration of every Karnilla appearance, that hasn’t been the case. Hopefully, that trend will change this week.

Only one way to find out.

This is a Karnilla cameo that only the most eagle-eyed reader would catch, as the back of her hair and a part of her dress barely appears during a recap panel highlighting Loki’s recent nefarious deeds. 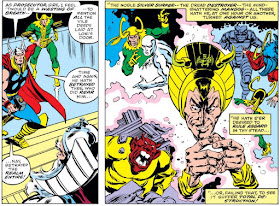 For Odin to fulfill the prophecies of Ragnarok, Balder was killed by the blind God Hoder. Odin used his vast power to ensure the tiniest spark of life remained in Balder, keeping him both alive and dead. 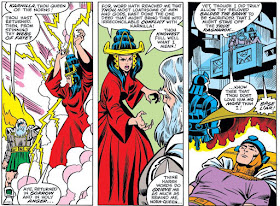 Obviously, Karnilla was not pleased at all about this, and gives Odin a piece of her mind. Odin gives her the line about how he would be willing to sacrifice anyone to save Asgard, no matter how much it might hurt. Karnilla will hear no more excuses, and demands Odin restore Balder or she will have her revenge.

Odin puffs out his chest and talks a big talk about putting her in her place, egged on by Mimir, but ultimately backs down and leaves for elsewhere. (Mimir refers to Karnilla as “a goddess as old e’en as thyself.” I know Karnilla is only really as powerful as the writer needs her to be, but I like the idea that she’s as powerful as Odin.)

After a brief talk with Mimir, Karnilla decides to let things play out, for now.

Karnilla is despondent at the bedside of the near-dead Balder. Frigga tries to defend her husband Odin’s actions, but Karnilla will hear none of it. She lays into Frigga, questioning her husband’s true motives, even bringing up his infidelity. (Karnilla pulls no punches. Odin is a dick, he deserves it.) 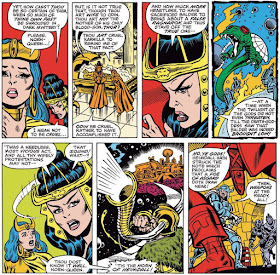 Karnilla makes a cameo in one panel during the retelling of Odin’s origin story, as told by a floating eyeball. (This is one of the weirder Thor comics ever created, with Odin’s disembodied floating eye telling Thor the origin of Odin and Asgard. It would memorably be later dismissed by Walt Simonson during his legendary run on the series.)

This would be the end of one of my least favorite Thor storylines, involving Celestials, the Eternals, weird Odin origins, floating space eyeballs, and weird adaptations of Norse mythology. However, as bad as it was, this last panel is one of my all-time favorite panels in the history of Thor. 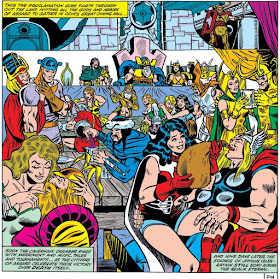 Everyone is drinking and celebrating and having a grand old time, and then there’s Balder, standing there with a sour look on his face, not even able to enjoy a beautiful woman with her arms around him. It’s the perfect encapsulation of Balder as a character, and it never fails to crack me up. He’s literally a walking buzzkill.

THOR #303
Artist: Keith Pollard (and who knows who else)

Karnilla and Balder are one of a series of pin-ups featured in the back of the comic. 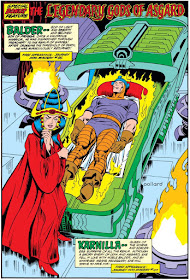 Balder and Karnilla get their very own dedicated back-up stories starting in this issue.

Karnilla tries to respark the romance between her and Balder, but dying has left him a very changed man. 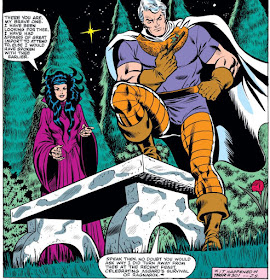 His experience as a spirit in Valhalla has left him unable to slay any foe in battle. He’s also changed his opinion of her, believing her to be an evil being masquerading as benevolent to win his heart. Karnilla assures him that all she wants is for him to rule by her side as her King.

Balder accuses her of being nothing but a temptress, an insult one too many for Karnilla.

She conjures forth a fearsome being named Barbaric, who is unable to harm Balder in any way, thanks to Frigga’s spell that no living being can harm him. She arms him with deadly (to him) mistletoe, but changes her mind before he can strike Balder with it, sending him back to Nornheim.

Karnilla asks him if her refusal to slay him has convinced him of her love, but Balder responds that anybody that really loved him would never even try in the first place. Balder leaves her, and Karnilla vows, yet again, that he will be hers. 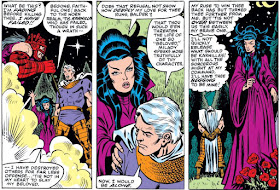 (This is an interesting change in the dynamic between the two, as Balder had been portrayed as loving Karnilla just as much as she claims to love him in recent stories. Only her station as an enemy of Asgard kept them apart, but now, Balder has no interest in being with her at all anymore. At least he’s grown a spine for once.)

Karnilla spies on Balder as he walks among an Asgardian marketplace, preparing to enact her latest plan to steal his heart. 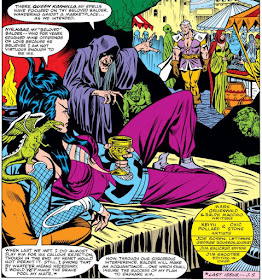 Balder runs into a young woman named Nanna, and they quickly take a liking to each other. Before long, they are deeply in love.

One day, Karnilla uses a mystic spell of transference to bring Balder and Nanna to Nornheim. 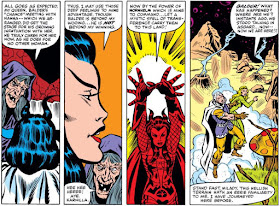 After a perilous trek through the dangerous realm, they arrive at Karnilla’s lair. Karnilla takes Nanna prisoner, and threatens to kill her if Balder does not agree to marry her. Balder agrees, under the condition that Nanna be allowed to leave, and no harm will ever come to her. 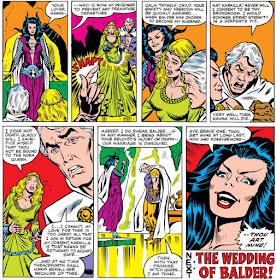 This has got to be one of the more unusual plots to win someone’s love that I have ever read. So you’re telling me your plan to get this guy to marry you involved manipulating him to fall in love with someone else first? This plan is a little too dumb, and a little too cruel, even for Karnilla. She’s traditionally a lot more clever than this.

Balder and Karnilla prepare for their wedding, despite Balder’s clear disgust with having to do so. To ease his fears, Karnilla shows him his beloved Nanna, safe and unharmed back in Asgard. 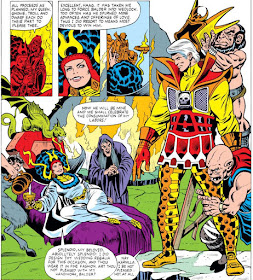 As the preparations continue, Nanna decides she will not let Balder go through with it. She makes the perilous journey from Asgard to the Norns, and confronts Karnilla right as the ceremony was set to begin. Under the terms of the deal, Balder would be free if any harm ever came to Nanna. So to save her beloved, she stabs herself in the stomach, committing suicide.

Balder runs to her, cradling her in his arms as she dies. The marriage is off, and Balder vows to never gaze upon Karnilla’s face again. Karnilla remains defiant for a moment, but then changes her mind. She tells Balder to either join her in her chambers, or she expects he and the dead wench to be gone when she returns. 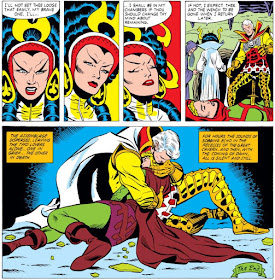 I don’t like this sequence of events. There’s really no way their relationship could ever recover from this. Not that I care so much about their relationship, but it is the defining characteristic of both characters and will eventually return as a factor in their future appearances. Then again, it is Balder. What else does he have going for him?

Using an enchanted crystal, Loki causes a massive snowstorm to befall New York City. If he has to endure the frigid cold during his latest banishment, so must Thor. Karnilla arrives, still feeling very vengeful, and offers to assist Loki in getting back at Thor. She knows of a powerful artifact that will put all of Asgard under their command, the plague cask. 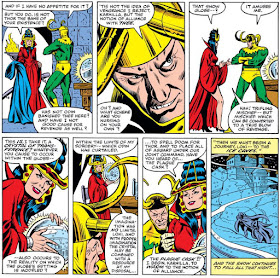 They travel to the resting place of the artifact, and using their combined power, free it from its icy tomb. Karnilla pulls a snow giant from the cask, and after placing it into the enchanted globe, it arrives full size in New York. While Loki is distracted by Thor’s battle against the snow giant, Karnilla unleashes some of the monsters from the cask on him.

Locking Loki in a cage, Karnilla reveals that when his banishment has ended, she plans to take his place when Odin magically transports him back to court. There, she will unleash the full power of the plague cask upon Asgard.

With no other options, Loki enters the crystal, and pleads with Thor to help him stop Karnilla. Thor returns him to Asgard using the Rainbow Bridge, and hurls him back towards the far mountains of ice where he was banished.

Once there, Loki gets the drop on Karnilla, and threatens to use the plague cask against her if she doesn’t get lost. She doesn’t risk it, and quickly departs.

Loki visits Karnilla, to borrow some Norn Stones to use in his latest plot against Thor. (This time involving Fafnir the Dragon, which is always worth your time.) 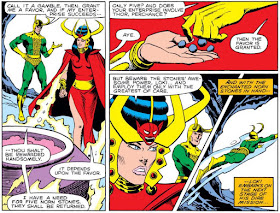 Tyr and Loki plot to gather all of Odin’s enemies against him, including Karnilla.

As near as I can tell, this particular plan goes nowhere, as next issue they are focused on stealing Idunn’s golden apples of immortality.

Altogether, this wasn’t the worst collection of Karnilla stories, but it didn’t reach the peaks of last week. It could always be worse, she could spend all her time fretting over Balder. Yet, all is not lost. The brilliant Walt Simonson is here to save the day. Next week, Karnilla's next appearance comes during Walt’s legendary run as writer and artist on Thor. My meager words will not be able to accurately express the greatness, but I will do my very best.
Next week, Uncle Walt!
Duy Tano at 7:00 PM
Share