So What Was FINAL CRISIS About?

After two years, I finally bought and read FINAL CRISIS, by Grant Morrison and a host of artists, mainly JG Jones and Doug Mahnke. I'm not going to give it a full review - you can get those from anywhere around the 'Net, and the truth is that I think it's such a love it or hate it comic that no review is really gonna do you any good. 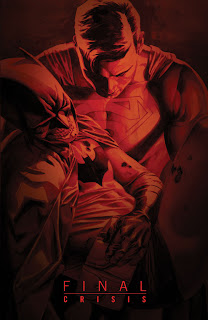 I will, however, address the question, "What's it trying to say?" or "What was it about?" Needless to say, there will be spoilers.
Before I go on, I would like to point out that I fully believe in the concept of "death of the author." That is, it doesn't matter what the author was trying to say; what matters is what you take and interpret from the work. Interpretations should, however, be backed up by evidence - lack thereof leads to (and I know that for some people this concept is mind-boggling) wrong interpretations. So there. As long as there is evidence for it, I think the interpretation is valid.

Okay, so, in FINAL CRISIS, we're introduced to a race of beings called the Monitors. There are 52 Monitors, one to, uh, monitor each of the 52 worlds in the DC Multiverse. They attempt to prevent any crossovers between universes from happening.

One Monitor, Nix Uotan, is sent to earth to be the hero of the tale while another, Dax Novu, is the best and most spirited of the Monitors, but is corrupted to become the evil vampire Monitor, Mandrakk, who wants to end the story of the DC Universe. With the help of the Supermen of 52 earths, Nix Uotan is able to hold back Mandrakk.

Okay, so one thing you should realize is that Morrison here is doing metacommentary. That is to say, he is using the superhero comic to talk about the superhero industry. This is by no means new; it's been around since at least the first appearance of Mary Marvel, where Captain Marvel Jr. is talking about going to his own series while Mary can stay with Captain Marvel's series for a while until she finds a comic of her own. 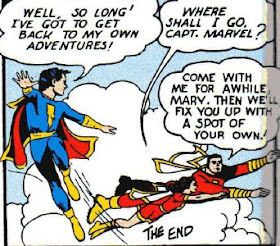 Popular theory has it that the Monitors represent the continuity-obsessed comics fans and their tendency to catalog and categorize comics stories instead of appreciating and exploiting its boundless possibilities. While that is indeed a valid interpretation, I think it's far more apt if we interpret the Monitors as the like-minded writers. It's actually a very slight modification to the same interpretation, because the end result is the same. The Monitors try to prevent crossovers just as fans and writers who wish to keep things in the DC Multiverse - one that was never created to be a multiverse - neat and orderly try to prevent crossovers. The message here is clear: in everyone's attempts to make things more easily digestible and easily cataloged, the sense of wonder that we feel in having a realm of possibilities open to us.

So now, remember, this is metatext, so when Morrison refers to the "Final Crisis" in this panel, he's not mainly referring to the in-story "Crisis"; he's referring to the comic FINAL CRISIS, which he is writing, which is his last-ditch effort to save the creation of the superheroes from a loathing and greed beyond measure - the loathing and greed of the fans and writers who wish to keep the hobby exclusive and insular, instead of opening it up to a world of possibilities.


So, in FINAL CRISIS (mostly SUPERMAN BEYOND, actually), the vampiric Monitor is Mandrakk, who was once Dax Novu, "the best of them." Mandrakk is the guy waiting at the "end of all stories." (Morrison is not being very subtle here.)

Does the concept of Mandrakk sound familiar? Apply it to the current theory. Brilliant writer, whose legacy has been so tainted by what he's done that the current industry has taken him and perverted his legacy into a vampiric, parasitic one? 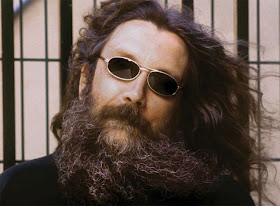 Yep, Mandrakk is Alan Moore (and, by extension, Nix Uotan is Grant Morrison - Grant does tend to have a character in his works who is representative of himself). Rather, because Moore actually left DC Comics and wrote a bunch of other stuff that had nothing to do with what his legacy is perceived to be, Mandrakk is what DC Comics has done to Alan Moore's legacy: instead of Moore being remembered in DC Comics as the one of the best writers they ever had, he'll more be remembered as the guy who wrote apocalyptic, dystopian stories who tried to end superheroes. This is most apparent with "Captain Adam," a Superman from a parallel world who is obviously based on WATCHMEN's Dr. Manhattan.


Adam says, quite coldly, that he is the "endgame of the idea that spawned the likes of Ultraman." That idea is, of course, Superman, and the invention of the superhero, and when Adam says he is the "endgame," it means he is the logical extrapolation of that idea to the farthest extreme: a cold, inhuman superpower who is more fascinated by atoms and neutrons than humanity. In other words, very much like Dr. Manhattan:


So basically, when Mandrakk shows up at the end of FINAL CRISIS, or, as he says, "at the end of all stories," the DC Universe is in a major shambles. And who saves it?

That's right, Superman saves it. Take note of the fact that Superman's hand over a swirling spiral of energy. That's very much like the "hand at the dawn of creation" - the symbolic beginning of the DC Universe.

Superman is recreating the DC Universe with this action, and he's assisted by:

A bunch of Supermen from a variety of earths (led by Captain Marvel, the original and best "next Superman," natch!). The message is obvious: No matter what you do to DC Comics, or perhaps even comics in general, Superman will be there to make sure it's not going down. Everything in this genre comes from Superman, and the idea is so ridiculously powerful that you just can't kill it.

But note who actually kills Mandrakk.

Now, Grant Morrison is not very subtle in his execution of this story. It doesn't really work on multiple levels with many layers of meaning - there's the bottom layer, where you know what happens and you're not sure if you get it (unlike other comics where you would at least get the lowest, most superficial layer), and then there's the other layer, the metatext. I explained this comic to two people who read it and got what happened, but didn't get the metafictional meaning, and one of them gave me a very telling response.

"What about people like me, who don't know or care about that stuff?"

And that's the ultimate irony of FINAL CRISIS, I think. In trying to write an allegory about "saving the DC Universe from a greed and loathing beyond measure" and saving DC Comics from the vampiric practices of comics culture, Morrison wrote a story that you would only fully understand if you knew of the history of comics and current industry practices, which could possibly be considered just as vampiric as anything he was speaking out against.
Duy Tano at 1:47 AM
Share